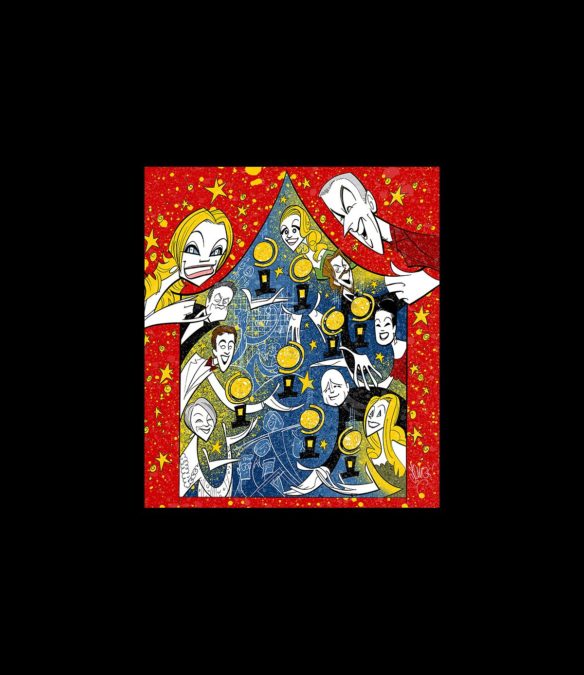 It was a lovefest at Radio City Music Hall on June 7! Dynamic duo Kristin Chenoweth and Alan Cumming hosted the 2015 Tony Awards, and Broadway.com Resident Artist Justin “Squigs” Robertson was on hand to pen a portrait of the celebration. Front and center are acting winners Kelli "worm-dancing queen" O'Hara, Nashville fan Michael Cerveris, Her Majesty Helen Mirren, acceptance speech master Alex Sharp, the "Something Wonderful" Ruthie Ann Miles, the Bombshell Bard Christian Borle, soon-to-be canine Annaleigh Ashford and Prime Minister Richard McCabe. There are also nods to Best Musical Fun Home, Best Revival of a Musical The King and I, Best Play The Curious Incident of the Dog in the Night-Time and Best Revival of a Play Skylight. Cheers to the winners!

About the Artist: With a desire to celebrate the magic of live theater and those who create it, and with a deep reverence for such touchstones as the work of Al Hirschfeld and the wall at Sardi’s, Squigs is happy and grateful to be among those carrying on the traditions where theater and caricature meet. He was born and raised in Oregon, lived in Los Angeles for quite a long time and now calls New York City his home.