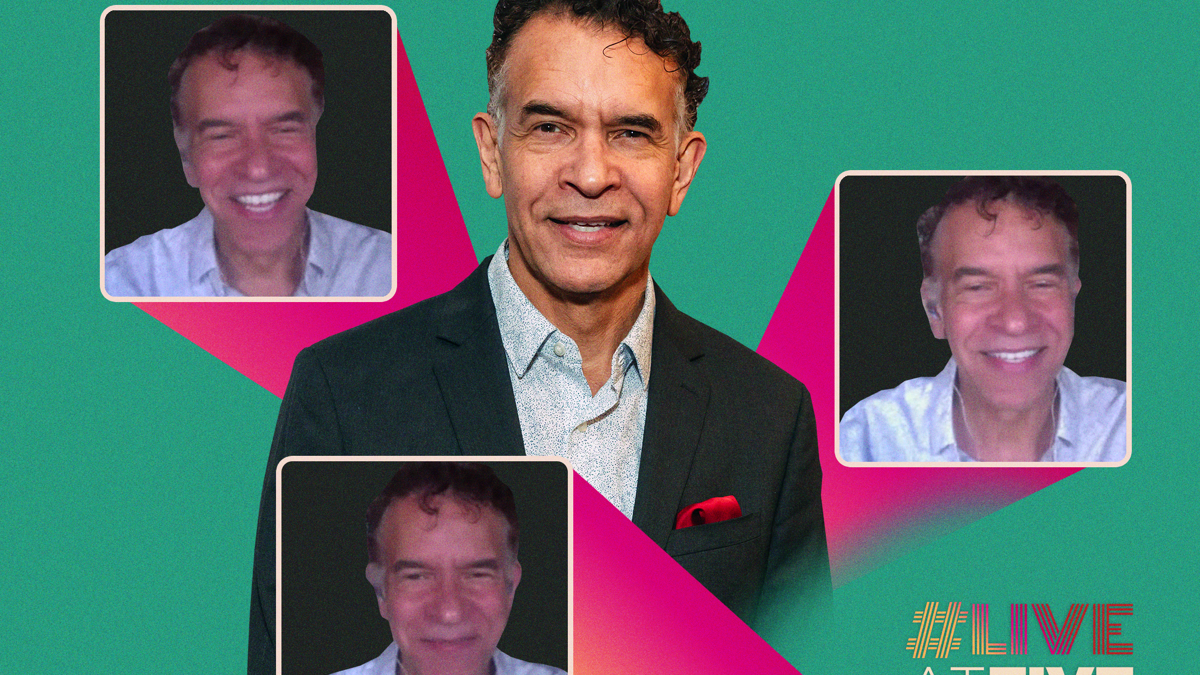 Brian Stokes Mitchell on Acting and Advocacy: ‘It’s One of the Reasons I Was Put on the Planet’

Brian Stokes Mitchell has been working nonstop. As chairman of The Actors Fund, Mitchell has been overseeing its COVID-19 emergency fund, singing "The Impossible Dream" out of his window and advocating for artists who are out of working during this season. Mitchell appeared on Broadway.com's #LiveatFive: Home Edition to talk with Paul Wontorek about how he knew what "he was put on the planet for" and more.

Just weeks into the Broadway shutdown, Mitchell announced that had tested positive for COVID-19. After slowly regaining strength and being cleared, Mitchell took to his window to honor essential healthcare workers. "I would vocalize as often as I could to stay strong," he said. "I would go to the window every night at seven o'clock and applaud all of the essential workers. One of those days I just felt like, 'Oh, I think I seem to have my voice back in my lungs back.' So, I started this spontaneous thing of 'The Impossible Dream' and people on the street responded very positively to it. I noticed more people were there the next night looking up at the window and I thought, 'Oh, maybe I should sing it again.' I did it for about four weeks and the crowd kept getting bigger and bigger. Eventually it got to be a traffic concern with so many people so I've taken a break."

As previously reported, The Actors Fund recently broke records by raising over $10 million for COVID-19 relief, something that Mitchell is extremely proud of. "This is my 16th year as the chairman of the board," he said. "I've been saying that it feels like the last 138 years that The Actors Fund has been in existence has been a rehearsal for what we're all going through now. Normally in a year, we would give out about $2 million in emergency financial assistance. Since March 24th of this year, I think we're up to about $12 million. My philosophy is when the universe asks you to give back, especially when you've been so fortunate, you say yes. Ragtime was one of those occasions where I felt like doing that show is one of the reasons I was put on the planet. It also feels like now, me being the chairman of the board of The Actors Fund, is also one of the reasons that I've been put on the planet. I'm in a position now where I can help a whole lot of people."

With two Tony Awards and 11 Broadway credits to his name, Mitchell's songbook wheelhouse is well-rounded and diverse, but there's one song he continues to go to. "The song that inspires me the most would have to be 'The Impossible Dream,'" Mitchell said. "What's interesting about that song is it seems to fit whatever happens to be happening. When I did the show [Man of La Mancha], it was the anniversary of the March on Washington.I was singing the lyrics of dreaming an impossible dream while thinking of Martin Luther King. And now what's going on in the world, that's one of the reasons I chose that song. 'To dream the impossible dream, to fight the unbeatable foe, to bear with unbearable sorrow, to run where the brave dare not go.' It seems to work in so many different situations, and it's always this beautifully deep, but hopeful and inspiring song. I think that's why it has lasted through the years. I just can't stop singing the song."

Watch Mitchell talk about what show he gets recognized for the most and more in the full episode below!